A photographer’s journey in the wild!

You could say that I’m living my dream! A dream that I had fostered since my childhood, a fascination to capture precious moments in life and frame them forever. But somehow in my life’s journey, that childhood dream was superseded by my career and personal engagements as an engineer and a family man. I was occupied with my priorities but destiny remembered that I still had to accomplish one very significant purpose in life – fulfill my dream!

Almost two decades ago, a dear friend of mine, Satheesh, took me on a trip to B.R. Hills, a beautiful wildlife reserve in south-eastern Karnataka. Witnessing nature in its raw form, the expansive greenery, wild animals freely roaming in their turf, rekindled my childhood aspiration. My journey as a photographer began with my humble possession – a digital camera. Capturing images of the wild thrilled me to the core. Thereafter, I went on several trips to the other nature reserves in Karnataka, such as Bandipur and Kabini. Fortunately for me, my family loved these wildlife expeditions and my wife, in particular, encouraged me tremendously.

Equipped with a Nikon D200, my first DSLR, I went on my pursuit to capture an image of a tiger in the wild! But it was easier said than done. Twelve years passed by and the elusive animal didn’t even show a glimpse of its majestic being. When I was almost certain that I would never see the animal in its habitat, fate finally was on my side. On an afternoon safari in Bandipur, I came across “His Royal Highness” – the tiger – lying near a salt pit! Though it was the moment I had waited for so long, sighting the majestic creature left me awestruck. It took me a while to realize that I’m actually seeing the tiger in person and not in a documentary on TV. I was so excited on seeing the tiger in the wild and up close that it also made me shiver with anxiety about the animal’s reaction. In that thrilling moment I could barely manage to hold the camera. Words cannot do justice in expressing the tremendous mixed feeling I experienced on my first sighting. It’s a feeling that every photographer must experience and cherish for life! This tiger appeared to be my lucky charm, as thereafter on my several trips to the wildlife, I saw many tigers and leopards

These experiences further fueled my yearnings to capture wildlife across and outside our country. I have traveled to the African continent, witnessed the magnificent wildlife in Maasai Mara National Reserve in Kenya. The wildlife reserve offers ample opportunities to those with a keen eye to capture nature at its best! And I have been able to capture several of those golden moments in the wild. I ventured further in my pursuit of capturing images of other wild animals in their own territory, such as jaguars in the Pantanal region in Brazil and brown bears in Kamchatka Peninsula in the far east of Russia. Back home, I was lucky enough to spot one of the most elusive beasts known, the black panther! It was sighted in the Dandeli Anshi Tiger Reserve in northern Karnataka. I’m ever so grateful to the CFO of the reserve, Mr. B.B. Mallesha, for the memorable trip.

I consider myself fortunate enough to live my dream and continue in doing so. I’ve recently traveled to Svalbard, in the Norwegian archipelago in the Arctic Ocean. This expedition brought me closer to another set of species in their natural habitat. I’ve witnessed them in action and captured images of the polar bears, and marine mammals such as walruses and whales. Their immense size and power left me mesmerized. A trip to Finland got me face to face with brown bears, wolves and wolverines in the wild. It was a thrilling experience to witness these predators in their hunting spree. I have seen beasts of different kind in the wild, now I also want to experience the tender and colorful side of nature. This year I’m planning to travel to Costa Rica to spot a variety of hummingbirds, nature’s tiniest and probably the cutest feathered creatures. My wildlife experiences have taught me to look at life’s bigger picture. It’s no longer just limited to living in the comfort of our modern homes but also witnessing life thriving in other forms in the wild, without boundaries. I can safely declare now that I sincerely appreciate the beautiful planet we live in.

People find different ways of appreciating nature. Then there is another set of people who make an effort in awarding those who capture rare and precious wildlife moments. For one such instance, I feel humbled to have received the Muthukulam Ragavan Pillai award in 2015 for my work on wildlife photography.

My family’s invaluable support acts as an impetus in achieving new feats every year. My son, Thomas Nirmal Mohan, a student of Architecture shares the same passion for photography. He has accompanied me on numerous wildlife expeditions. I hope he will continue with my wildlife photography legacy – a journey that I have been on for the past seventeen years! 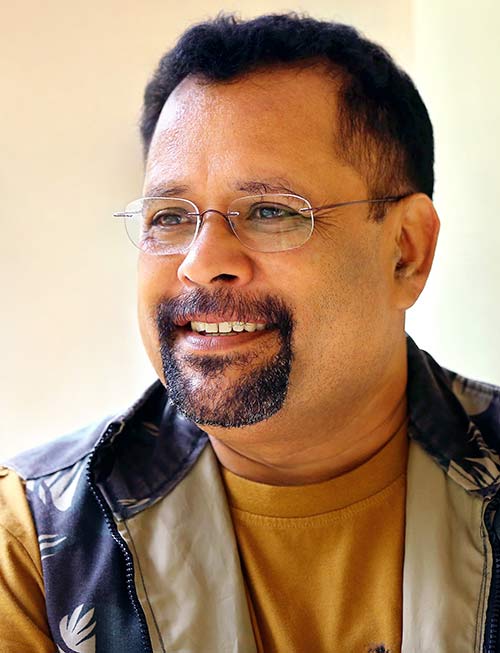 I feel humbled to have received the " Muthukulam Raghavan Pillai" award in 2015 for my work on wildlife photography.Thank you all for the support and encouragement.